In my previous post I talked about our company finally having HMO but may not push through because of unfavorable reactions from my coworkers. I thought it was not happening anymore but I WAS WRONG. The company found a package suited for our company's size and also generally favorable to the employees needs and demands. I can't describe how happy I was when I received the HMO card with my name printed on it. This is a best Christmas gift I could possibly have this year. I've been wanting this for so long and finally years of patience finally paid off. I won't deny that over the years I've been thinking of quitting and moving on. But for a variety of reasons, I always choose to stay and finally having the security of medical insurance gives me more reason to not think about quitting anymore.
***
Today I went on vacation leave mostly because I just want to avoid the Christmas mad dash traffic. And also to save money as well by avoiding temptations (aka malls!). I'll be back at work next week and will not really take a long break. I personally don't want long breaks to be honest (unless needed). And based on the past years, the days between Christmas and New Year are laid back and stress free at work (and the commute is not stressful)

***
In my previous post I also shared about thinking of ending my yearly tradition listing radio year end countdowns but I thought why not end it on the 20th year which I mistakenly thought was this year. As a friend pointed out, the 20th year of my tradition was actually last year because I started at 10 years old so last year was the 20th time I did it. My mind just automatically thought since I'm 30 now, it will be my 20th year of doing this. It's a little bizarre I have a numbers-related hobby when I'm poor in Math.

Anyway, I'll probably won't do my Dec. 31  tradition anymore. Maybe I'll eat my words and still do it when the day comes. For now, I think I will stop now. Or maybe just listen to it casually and literally not list it anymore. I don't know.  A part of me still wants to continue this tradition but it's just different now. The excitement I used to have just isn't there anymore. Honestly I kinda felt it in the two years or so but I continued out of habit  and I have nothing better to do on that day. I'm still indecisive right now. It's annoying because it's so shallow but I feel like it's such a big deal to me. I feel like it's letting go of my childhood or an old passion/dream. Who knew listing music countdowns would mean so much to me right?

A few days ago an officemate asked me why I don't go out and have drinks with them. I have a few reasons, some weird, some practical. First,I don't drink alcoholic beverages mostly because I don't like the taste. I tasted it before but I really don't like it so there's that. Another reason is that I've interacted with people who are intoxicated / drunk in some instances already and more often than not they say things which would make me uncomfortable. Sometimes offensive. I know it's likely just the booze talking and I should not take it against that person. I'm mostly level headed and understanding but I prefer to avoid a situation like that for the better. Lastly, I don't like staying that late as commute to home will be hard. I know this is a bonding experience for most where people let their guard dow But honestly I can have that even without drinking. I like talking to friends, sharing personal stories and insights. I love connecting to people despite my introvert, loner-ish personality.

Christmas is almost here. Yes, I don't feel as excited as I used to be but I try my best not to be a scrooge anymore so I try to get the Christmas spirit going. I love this season to be honest, it's so festive and gives me good vibes.

I was an intern for Journal Group of Publications where I mostly did proofreading. The interns were given a chance to write for the Christmas supplement of People's Journal. My pieces (one I co-wrote with my classmate Giselle) were published 10 years ago this week 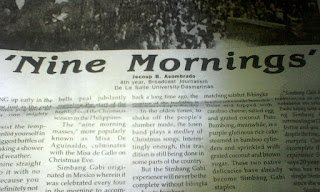 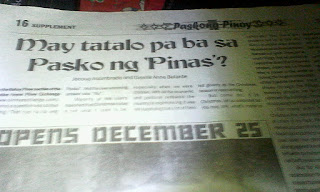