Just finished work at this ungodly hour! This is really what I don't like working from home because it extends my working time but what is important is that I get the job done. We are now back to Medyo ECQ so restrictions are a little loose especially curfew which has been a hurdle for my carpool shuttle! It's now back to 10PM here in Cavite and 8PM in Metro Manila, more reasonable time but I still think curfews and checkpoints are not really needed and they have became avenues for power tripping but oh well what can I do right? Nothing but do my best to deal with each's day struggle

Posted by forg/jecoup at 1:07 AM No comments:

Today I received a very touching gesture from a friend. It was so unexpected especially in a time like this where many people are struggling. I've been feeling so down lately that this unexpected surprise gave me a morale boost. Thank you and I will make sure this act of kindness will not go to waste.

Posted by forg/jecoup at 3:44 PM No comments:

So yeah that fleeting feeling I had yesterday of signing up to that online writing workshop faded away. I just returned to reality that I just can't afford it. My practical side always win. Not gonna lie it makes me sad that I can't do it due to financial constraints but hey I needed the money to help out house expenses and maintenance medicines for my parents too. The money I would have paid for that seminar could already buy many of my mother's prescriptions. Our car will need oil change soon as well so i contribute on that. Then of course bills after bills. Not gonna lie I do dream of living an independent life you know where all I think about is just me. But I don't regret looking out for my parents' welfare and really I could have done more if I made better career choices, money wise.  I really won't stop feeling inadequate so pursuing something of personal interest at the expense of general family needs is something I just can't do. It hurts when I think about it so I just avoid so I won't drown.

Posted by forg/jecoup at 1:00 AM No comments:

I saw that Fully Booked will be holding online writing workshops. The setup is actually something that is suitable for my preference. I'm highly interested because I want to seek knowledge because I feel like I'm in a rut right now, jus going through the motions and just dreaming but with no action. It is not for free though which actually works form me because if I shell out money, I'll be more committed to it. But well sadly I can't easily spend 2,500 pesos (the early bird discount) because of life's responsibilities and limited financial capacity I have.  But my heart really wants to try this out and  maybe it can help ignite a fire in me that I know is still there. Sadly, my practical side is really giving me a pause. I should be looking for additional source of income instead of spending with not essential stuff especially in this time. On the other hand, maybe I should see it as an investment to myself? Maybe I should dare take a risk like this one.How I wish I was  rich  so this stuff won't bother anymore.

This pandemic is scarier than ever especially now more than ever with a lot of people knowing someone who already passed because of this disease. Then the politics, those people in power have no shame anymore. No sense of humility. not even that apologetic or reassuring. Some people in power peddling a so-called medicine that says that cures COVID and not even backed by science. Regulatory board bending their rules to accommodate it half heartedly. Vaccine rollout quite a mess with people just now accepting this vaccine with questionable reason why it's here because there's no other choice. Kung ano na nandyan tanggapin na lang. I hate it so much. Especially because its comes from a place that is power tripping right now. Of course it was tolerated and coddled before so we are not even surprised anymore. I don't know how can ever we rise from this.

Posted by forg/jecoup at 8:00 PM No comments:

Thanks to company service today I was able to go back to the office! I really needed it because there's still a lot of pending stuff that I can only do at the office. And also good for my mental health to be honest. The past few days I have this recurring body pains from various body parts but today NOTHING. I was so busy today catching up with work load that I didn't think much of the CHAOS happening in this country.

Back in 2005, I was one of the chosen staff by my college student publication Heraldo Filipino to attend UST's Inkblots National Journalism Fellowship. It was my first ever seminar related to journalism and I was really excited! During that 3-day symposium, I attended lectures by seasoned journalists from print to broadcast like Shiela Coronel, Marites Vitug, Glenda Gloria, Jiggy Manicad, Charie Villa, Ruel De Vera, Nestor Cuartero, Quinito Henson and Christian Esguerra. My favorite lecture was from Christian Esguerra because he is eloquent and insightful (He was a PDI reporter back then and now he is hosting an ANC show and has a podcast too where his sharp interviewing skills are on display). The sessions of Quinito Henson and Nestor Cuartero were also memorable because we had mock press conferences featuring Purefoods basketball team and Champ from the band Hale. My most unforgettable session though was Editorial Cartooning  with Philippine Star's Rene Aranda. We weren't supposed to attend it because we are not visual artists but all the writing related sessions that day were not available anymore. However, we didn't regret attending because Mr. Aranda is such an engaging speaker. After his discussion, he asked the delegates to make an editorial cartoon about Calibrated Pre-emptive Response and I was so shocked when he picked my work as third best (My fellow news writer Em Sipin  placed second too!). I have NO drawing skills at all so I just worked around with what I can draw and hopefully not embarrass myself! Anyway, I was just rummaging through my stuff earlier and found this still in good condition. I really should frame this because it is a reminder of my 18-year old self when I was not jaded in life yet! 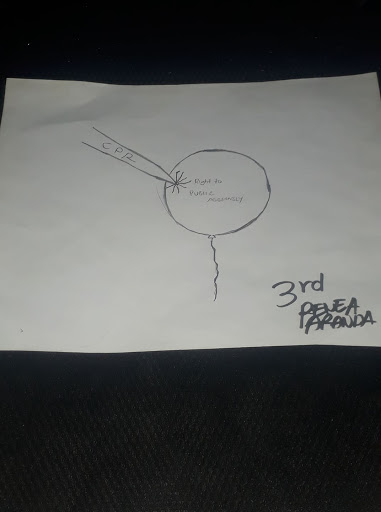 A co-worker passed away yesterday. I've worked with him in various projects and he's always efficient and on time. He's a chatty guy and always so nice. He would call everyone "Bradpack" which was his version of "bro" and "pare". I checked his Facebook and saw his son posted a farewell tribute to his dad. I read the comments and said his father died of COVID. Devastating. It's my first time to know someone personally who died because of this deadly disease. It just makes things feel more real to me. Since I'm work from home now so I didn't get exposed and honesty I didn't even have that much interaction with him lately as well because his shift was later in the afternoon back then. Still, once I go back to the office knowing he won't be there anymore is just making me feel so sad.

I will miss you Kuya Pat. Rest in Peace.

The past few days, I made a conscious effort to minimize my exposure to social media because the situation right now is just making me so anxious and hopeless. However, out of necessity,  I decided to check a few official government pages to get a specific information but I got lost reading a lot of comments from ordinary people. There's a lot of stress, distrust and hardship right now.  I actually got annoyed whenever I see meme/hugot/harot posts in the middle of more serious concerns and insights being shared.  I know that's how some people deal with tough situations - finding humor. But I don't know, it's been a year of this never-ending nightmare that I'm finding it hard to find something to laugh about.

Last Wednesday, I saw a tweet with a photo of long lines in the bus terminal last Wedneday. This is a nightmare back in the normal times but now with added anxiety of catching the virus and getting reprimanded because of an impractical curfew for the working class. This is a clear case of lack of foresight of those who set the rules. Our governor recently made a post about checkpoints that have caused heavy traffic and basically the blame was again placed to the ordinary people. It's harder to be part of the working class in this ordeal we have right now.

So today it was announced that the Enhanced Community Quarantine has been extended for another week. It was inevitable with over 10K for 3 days now.  It stresses me out both health concerns and economic issue. I'm not sure if I can go back to the office next week but I really want to. So unbelievable that I'm in this situation yet again

Yeah another record high, over 15K. Over 3K is backlog from March 31 but still not reassuring. How are we going to deal with this anymore? 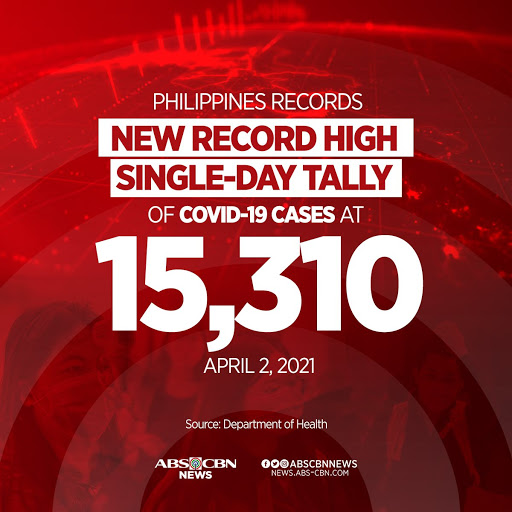 Posted by forg/jecoup at 6:51 PM No comments:

Today is Maundy Thursday and the start of April. Second holy week and summer season in a pandemic. This week is traditionally quiet and somber but the silence right now is deafening than ever. I hope and pray next year will be better.