I am now a Yahoo Messenger user. Add me up, my id is jecoup9587. Haha, I'm such a late bloomer with a lot of stuff and one of this is the YM. Well, before i was a complete idiot to what the heck that is. I only use the internet for research, blogging, joining forums, email,friendster,reading hehe. But this month, when we had an internet connection once again at home(we had for a month dial up internet access before which was a waste of time,electricity and money, this time we're using Smart Bro) I decided to try that YM thing. And well its fun pala hehe. So guys add me up, but introduce yourself incase your IDs are different from your name or you don't have an avatar of your real looks hehe.

Today, our yearend proposal got approved already. Preparing that thing was so stressful and not easy. We have to consider a lot of stuff, it was hard and complicated. So I was a bit annoyed when I heard not so good remarks when they find out some details of the seminar/workshop. If they only knew what we went thorugh for the past week just to get things done.

I almost forgot that tomorrow is the distribution of summer grades. But then again I already knew my grade a week ago since it was posted in the dlsud portal already. I will just get the hard copy for filing. I like my grades (3.50 for PublicRelations and 3.25 Rizal). It was not an easy summer term especially PR which was an exhausting subject so thats why I'm so glad to get a high mark (and the highest grade in our class hehe). This summer term also served as a testing ground on how I will balance my academics and HF work. 'm glad I did well. Thank God!
Posted by forg/jecoup at 2:43 PM 3 comments:

The school year hasn't started yet but I'm already exhausted with so many things to do.

But it's better to be tired than be bored.

Today, we had the ocular inspection of the printers. It was fun. Syempre special treatment kami dun hehe. I asked questions to the people touring us in their plant, too many questions I think. I caught someone lying, I asked a tricky question and his answer was too good to be true.

Good thing,I don't have summer classes anymore because I could now focus my energy with HF stuff. I have so many things to do. My term faces lots of problems from broken PC and printer, being understaffed (with some of the remaining staff planning to file for LOA), tight budget (sana marami mag enroll this sem hehe) and some other problems that we inherited hehe.

Because of the LSPCON preparations and majority of the EB have (mandatory) summer classes, we have delayed some of the activities that should have been done this May. We started the pre bidding later than usual. And the yearend workshop is now scheduled on the first week of June. And we haven't really prepared that much for the recruitment for the freshmen orientation which is tomorrow.

Oh well, I had my first editing experience yesterday (courtesy of the HF Sports, Give them a round of applause for early submission of articles ). I kinda felt weird when Hanna (our Assoc) gave me the articles that i'll edit. I admit kinareer ko yun hehe, I read the article so many times making it sure that I did not left out anything or committed editing mistakes. I hope I did fine.

And before I end, earlier today Pat (our News Ed) texted me and said that the office of the Mayor of Dasmarinas called up and said that they made a tarpaulin congratulating HF for winning first place for the Broadsheet category on the College of Editors Guild of the Philippines awards. I was surprised since I don't know how did they know that info. If they called up during the campaign season, I will be suspicious but they called after the election and with winners already, I'm quite intrigued with this.Anyway, I'm glad that they showed appreciation on the achievement of HF.

The end of May is nearing. The final year of my college is about to start. And I know it will be a tough year.

I will embark on this journey with this thing in mind

Let me share to you a montage made by Gerard Joseph Atienza of the 2007 La Sallian Schools Press Conference hosted by DLSU-D. You will see how the three day seminar went in this audio visual presentation

Posted by forg/jecoup at 9:35 PM No comments: 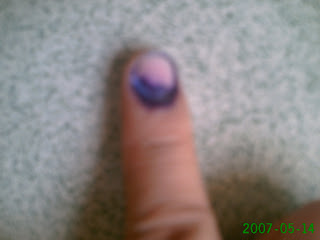 Today I voted for the national elections for the first time. It was a family affair as all six of us in the family went to the precincts at the same time. I did not have a hard time finding my precinct because my precinct is the first one you will see upon entering the school where the voting is being held. An advantage of having surname that starts with letter A is that you'll easily find your surname on the voter's list, my name was located on the first page of the list. We came in the voting precincts at 7:30 am, and I was surprised that many people are already there. The line in my precinct was okay and I got in quickly. The teachers in the precinct were former teachers of my brother and they had a short chat and I overheard the rant of the teacher that how she wish she was not there, it was evident in her face that she does not like what she was doing. I could not blame her, I bet she has been doing that for years yet she is not receiving what she deserves. Anyways, I went on and voted. My choices for senators, may seem odd. I voted mostly for the candidates that are not that popular and some even virtually unknown, but I did some research and I like their platforms and background. I know its unlikely that 60% of the people I voted will win but still I voted for them because I believe in them and I don't like to vote because of popularity's sake.Most of the candidates that were topping the surveys were not included in my list, I don't like most of them and even if they are sure winners I'm glad that I did not vote for them. I had a dilemma a while ago because I only had 11 senators, but I did not want to waste the remaining slot and it took me a while to pick my 12th senator, its quite ironic that the there were so many choices (almost 40 people ran for the senate) but I still had difficulty completing my line up. As for the other positions, I admit that a lot of names were so unfamiliar to me. With that I decided to vote for the candidates who belong to a party that I trust and had a good record. It's quite risky but I hope I made the right decision. As for the party list, there were so many groups to pick but I notices that majority of those groups are not that really representing a marginalized sector but more of socio-political activists. I voted for a party list that represented the disable because I do believe that they are not represented in the government.And within the span of an hour, I've accomplished one important responsibility: to vote. Many of my peers opted not to vote because of many reasons like they find it useless. For me it's not, yes our electoral process has its flaws, but I'm not giving up. Voting is a way for us to show that we care for the welfare of the nation. The political situation may seem hopeless but if we the citizens give up, the more the country will suffer. Yes, our votes could be cheated, but you could not complain to something you were not a part of (especially that even if you have the opportunity to vote, you decided not to exercise it). Your choices may not win but because you voted you have the right to demand to the winners to prove you wrong and show you they are deserving of the position.Yes, it is just one vote, but it makes a difference.
Posted by forg/jecoup at 1:30 AM 4 comments:

I'm finally home after the three-day Lasallian Schools Press Conference 2007 hosted by DLSU-D. I was a stay in commitee member. It was an experience I will never forget in my life, I met a lot of people and learned so many stuff. It was a tiring and a challenging experience. But all the physical exhaustion paid off when I learned that the feedbacks were generally good. When I toured the delegates of Ang Plaridel of DLSU-Manila they were all praises about how beautiful the DLSU-D campus is. It was a nice feeling that other people appreciated my school. And a lot of delegates had a fun stay specially the LSPCON challenge. I wasn't able to attend a lot of seminars becuase I was too busy taking care of some stuff for the seminars and I was running (well not really just fast walking haha) errands every now and then. But I was happy that we were able to invite some notable and respected media practioners like Quinito Henson, Isagani Yambot of Philippine Daily Inquirer and Yvonne Chua of PCIJ. I admit that days before the event I was really skeptic if we could pull this off and I'm so happy I was proven wrong. In general, LSPCON 2007 was a success though there were problems here and there and a potential big problem that was fortunately resolved (it happened the night of Day 2, that incident was so stressful and embarassing and one of the unforgetable moments in my life. hehe)
It's now over and I'm glad that we did it well. I wanna congratulate all the people who poured their heart out just to make LSPCON 2007 a success
Posted by forg/jecoup at 8:58 PM No comments:

I can't sleep, I'm currently doing some stuff for the 2007 Lasallian Press Conference (LSPCoN)which is just a FEW HOURS AWAY. LSPCon is a gathering of campus journalists from different La Salle schools. This is the third time this event will happen, DLSU-Manila and College of St.Benilde were the first two hosts. I'm quite nervous but very excited. I hope things will turn out fine. We all worked hard for it especially Mam Brenda,our Student Publications Office OIC, who gave out her heart in organizing this event. Earlier today we were so damn busy, some problems sprouted but I guess it is just normal especially that this is the first time we will host such big event. Tomorrow is judgment day, I'm really praying that things will run out smoothly
Posted by forg/jecoup at 1:46 PM No comments: