Review: The Secret in their Eyes 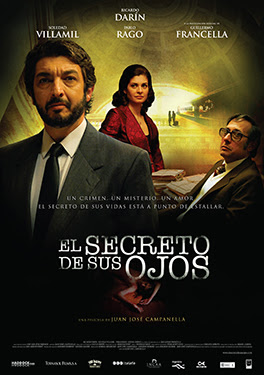 I watched The Secret In Their Eyes (El Secreto de Sus Ojos) during the 10th Spanish Film Festival in Greenbelt 3 and I admit the reason I wanted to see this film is because it won the Oscar for Best Foreign Language Film in 2009. The film from Argentina was a surprise winner against favorites France’s A Prophet and Germany’s The White Ribbon. After seeing the film, I tweeted that while I liked the movie I was a little underwhelmed because the story was somehow predictable. But then days after seeing it, I still thought about the film from time to time and made me think otherwise. It had a lasting impact and I now understand why this film won the hearts of the Academy.

Benjamin Esposito (Ricardo Darin) is a judicial employee who’s about to retire and is writing a novel inspired from a crime that he investigated several years ago. In 1974, Liliana Cotto (Carla Quevedo) was raped and brutally murdered in her home in Buenos Aires. Esposito took the case and met Liliana’s husband Ricardo Morales (Pablo Rago) to investigate the crime and learn more about Liliana’s life. After browsing Liliana’s old photo albums and Esposito got suspicious on a man who’s eyes never leave Liliana in the photos they are together. He found out that the man is a friend from Liliana’s hometown named Isidoro Gomez (Javier Godino). When Esposito and his colleague Pablo Sandoval (Guillermo Francella) tried to look for Gomez they found out he left the city that made them more suspicious. However, complications arose during the investigation and the case was closed. One year after, Esposito saw Morales again and found out that for a year he was checking out train stations hoping to find the man who might killed his wife This pushes Esposito to convince his boss Irene Menendez-Hastings (Soledad Villamil) to open the case again. As he search for the truth Esposito face hurdles of seeking justice during a tense political time in Argentina.

The way the case unfolds in the film is somehow predictable and the viewers should also simply accept the notion that Esposito is that perceptive that a random browsing of old photographs could lead him to find the potential murderer. It’s quite poetic to use “the way the eyes move” but let’s face it, this is quite an absurd idea to base an investigation for. But the film as a whole is strong enough that the issues I had initially didn't matter in the end.

What sets the film apart from being just a simple crime drama are the complex setting, distinctive characters and the multilayer narrative. The film used the backdrop of a time of political turmoil in Argentina and it’s unsettling how it affected an isolated murder case. I have no idea of Argentina’s political history when I watched this film and to better appreciate the story, it’s good to read up about it because understanding the context will make you fully grasp the film’s message.

The characters are well written and never one-dimensional. They are purely human. Gotta give kudos to the actors who all did excellent portrayals. Every conversation and exchange of looks will call your attention. It also worth nothing the chemistry between Villamil and Darin is electrifying and it helped make the love story of Esposito and Hastings overcome the romantic clichés it was riddled into.

The film never went melodramatic just to showcase strong emotions and chose instead to use the silence, character gestures and facial expressions to its full effect. The film also successfully explored the passion of a human being and how it drives us to do things despite the odds. And the movie has a touch of humor as well and the light moments never felt awkward or forced.

The direction and technical aspects of the film is simply superb. It perfectly captured the tone and mood of the era this film is set on. The camera work is impressive from the beautiful shots of Buenos Aires to the astonishing sequence involving a long take of a chase scene in a soccer stadium.

The Secret in their Eyes has murder mystery at its core and on the surface it might be a story that you could just watch from TV procedurals but the film effectively blended romance, political commentary and character study that it gave the narrative an emotional resonance and powerful prose. It’s definitely a masterpiece. 10 / 10.