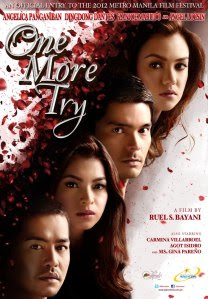 The 38th Metro Manila Film Festival Best Picture winner One More Try offers a very interesting tale of a moral dilemma. I read that the movie’s plot is strikingly similar to a Chinese film but I haven’t seen that so I can’t compare but on its own One More Try thrives thanks to commendable performances but it still can’t fully escape the awkwardness of its story and some of the Filipino melodramatic tropes.

Grace (Angel Locsin) looks for Edward (Dingdong Dantes), the father his son never met knew. Grace’s son needs a bone marrow transplant and only Edward could help him. When they found out that Edward couldn’t donate his own, the doctor suggests that they should have another child who can give his bone marrow. But Edward is now married to Jacq (Angelica Panganiban) while Grace is in a long-term relationship with Tristan (Zanjoe Marudo).

While the premise of One More Try is medically possible, the way the movie builds up the predicament is contrived. The doctor played by Carmina Villaroel was just too unprofessional when she was pushing Grace and Edward so hard to sire a child the natural way. That scene, which was obviously intended for laughs, just left me cold. I know it’s just a movie but with a morally complex premise like this, there should be a sense of realism with the attitude and behavior of the characters no matter how minor the role. I feel like that the attempt to inject humor through the doctor’s perkiness and bluntness was out of place and offensive.

But setting that aside, One More Try is compelling enough thanks to strong performances from the cast who elevated the material. All the major characters were sympathetic and their actions were quite believable given how difficult the situation they were forced to be part in. Locsin delivered a career-best in this movie as she perfectly captured the struggle of a mother who will do everything to save her child’s life. Panganiban is equally impressive as she can fully express the inner turmoil of her character even without words. Dantes and Marudo were good as well with controlled but heartfelt performances. There are a lot of dramatic exchanges but they were mostly effective with no histrionics from the actors.

It’s also worth noting that there are surprisingly good choices in direction for a mainstream movie like scenes that didn’t have much dialogue and it just let the visuals to do the talking. However, it still did some of the clichés like having a montage of scenes with the movie’s theme in the background and a predictable ‘happy’ conclusion. I’m not saying that movie should end in a dark place but I just think that given the premise it just doesn’t make sense to leave all the characters in a situation that is way too sociable as if they didn’t experienced the most grueling time of their lives. (Spoiler Alert!) It would have been better if at least one of the couples broke up for good or at least have an ambiguous end with regards to the status of their relationships. I just can’t buy that the four characters are that comfortable with each other as if they are all best friends and nothing happened. I know the intention was noble but the predicament was just too morally damaging to not leave a dent in their relationships.

One More Try is decent movie with some very promising aspects. For the performances alone, it’s worth the watch but they could have hit the right spot if they dared to make bolder choices. 7 / 10
Posted by forg/jecoup at 11:24 PM

"One More Try" is a rip off of the Chinese film, "In Love We Trust" Directed by Wang Xiaoshuai. "In Love We Trust" tells the story of Meizhu and Xiaolu, who were once happily married. The couple eventually divorced and remarried other people, but their lives cross again when their daughter Hehe is diagnosed with leukemia. Their loyalty, relationships and love are put to the test as they go on a journey to find a bone marrow transplant donor. This film won the Silver Bear at the 2008 Berlin Film Fest.

exuse me anonymous, One More Try isn't a rip off, just appreciate the film for what it is' BEST PICTURE!', and if you think it was a rip off, then don't rant on about it!!!! I loved watching the film One More Try, it was really compelling esp. Angel Locsin she was superb, without her the film wouldn't be Best Picture!

One of the best Movie I watched this year. Galing!