Review: It Takes a Man and a Woman 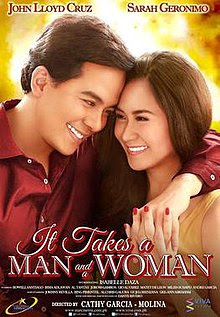 This review is originally published at Pinoyexchange

A romantic-comedy series is not a common movie franchise simply because most love stories told in this format follows a template and there's not much really left to say after the girl and the guy gets together in the end. But It Takes a Man and a Woman manages to find new grounds in the Laida-Miggy love story that's so strong that you just can't help but fall for its charm all over again.

Two years after their separation, Laida (Sarah Geronimo) and Miggy (John Lloyd Cruz) are forced to work again when Miggy's brother asked for his ex-girlfriend's help to broker a deal with the international media company she's working for. They both try to be professional but the lingering feelings they have for each other will not make things easy.

In the first few scenes of It Takes a Man and a Woman, it immediately sets up the reason behind Miggy and Laida's break up but even it was delivered quickly it was still able to convey the emotions of the characters and the struggle they experienced. The reunion of these two characters starts off lighthearted and comedic with a lot of zingers, banter and sight gags. And it all works out because we know these characters very well and the connection is magnetic.

The story then shifts to a more serious tone which is effectively heart-wrenching. When Miggy confronts Laida in the elevator and she finally unleashes what she has been feeling all along, one can't help but be moved with that scene. The moment perfectly captured the pain of breakups and that not even time and separation could easily erase it especially if the love shared was deep. The fact that this is the third part of this story helps because we already have an investment to their relationship and it also feels like they are just going through a natural cycle of real life relationships. It also had a thought-provoking insight about forgiveness which was helped even further by a subplot that involves Laida's parents.

The path to the conclusion is predictable and just like every other Star Cinema romance flick, there's a montage with the movie's theme song to speed up the process. But the chemistry between Geronimo and Cruz is just magical that watching them together delivers nothing but pure joy (even in the credits there's a lot of fun stuff to see with those two). The film also showcased how they have grown as actors. They made Laida and Miggy fully-realized characters that most people can relate to. The supporting cast were all good especially the trio of Gio Alvarez, Matet De Leon and the very funny Joross Gamboa who were all believable as they will remind us of our very own friends who teases us about our messy, complicated love lives.

It Takes a Man and a Woman is not flawless by any means. It tends to be overdramatic at times and there are still unforgivable production flaws (abrupt editing cutting off dialogue, noticeable change in color grading and lighting in just one sequence) but the strength of the story, the direction and the acting are all worth the money you'll spend in the theater. This is the fitting end of the Laida-Miggy love saga and I hope the producers will not be tempted to make another sequel because it already ended on a high note. And sure it may sound cheesy but It Takes a Man and a Woman will remind us why we all love the feeling of being in love.