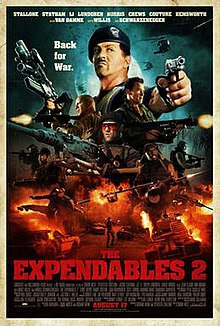 The very first scene of The Expendables 2 gets right into action and sets the mood for a bigger sequel pumping up the action to the extreme. It's no secret that the selling point of this movie is to see the biggest action movie icons of our time in one movie together and if you liked the first one, there's no doubt that you'll enjoy the sequel as well.

Church (Bruce Willis) hires Barney Ross (Sylvester Stallone) and his team for a mission to retrieve a blueprint to an abandoned mine that holds a stolen Russian plutonium. The team however was ambushed by terrorist Vilain (Jean Claude Van Damme) and kills one of them. Ross vows revenge and plans to attack Vilain's group.

The Expendables 2's plot is as conventional as the first one but it really doesn't matter because what we are all looking for this movie is an action nirvana and the movie definitely delivers on that matter especially on the bombastic first sequence that features big weapons, explosions and various fight scenes specifically designed to cater to each actor's action skill. My favorite action sequence would have to be Jet Li in which he uses pots and pans to kill the bad guys. However, some of the scenes are so chaotic though and hard to follow and the editing not as polished as well. It should be noted that the movie is Rated R-13 here so there are cuts which made the movie messier.

Willis and Schwarzenegger get more screen timecompared to their glorified actions in the first one although essentially they are still not part of the mission and basically just pops in but at least they get to do some fun action scenes this time around. And the movie definitely satisfied the viewers' craving with Chuck Norris' grand entrance and dropped in a Chuck Norris Fact along the way. The movie definitely does not take itself too seriously with several self-referential jokes and “wink to the viewer” moments. Sometimes the jokes are clever but there a couple of misses as well.

Stallone still has that movie star charisma that is enough to carry the movie and he shares good buddy chemistry with Jason Statham. Dolph Lundgren and Terry Crews were enjoyable as well and scored big laughs with the audience with their one-liners. One might think that Liam Hemsworth is out his league with this cast but the story manages to fit him in quite well and he held up decently with the other actors. Lastly, Jean Claude Van Damme took his villain role very seriously and while he comes off a little too cartoonish at times, he was still compelling to watch and his final showdown with Stallone was exciting.

The Expendables 2 still suffers the storytelling flaws of the first one and during the scenes when there's no action scene going on the energy dies. But for what is worth, the movie is as fun as it can get and seeing all those action stars in one movie is still a delight. 7 / 10
Posted by forg/jecoup at 4:54 PM