The Return of Funny Komiks

Funny Komiks is back! I've blogged about here before my mini tribute on Funny Komiks (read it here) and how it had a special part on my childhood. Well, I got the surprise of my life when I was browsing a magazine stand earlier today. When I saw FUNNY KOMIKS, I thought it was a back issue but I was wrong it was a new issue, in fact it is the COMEBACK ISSUE 18 pesos is the price, not bad actually because the last time I bought FK (which was five years ago pa) it was 16 pesos. Infinito Publications is the new publisher (before it was Islas Filipinas then Solid Gold) and it will not be weekly anymore (as stated in the staff box) but twice a month. The comeback went back to the roots of FK, stories for children talaga which are simple and witty stories with high emphasis on values. During my last years of collecting FK, I felt that the comics lost its touch already. The features where they publish drawings of theri readers is still present as well as the trivia portion and the "It's Posing Time" where the pictures of submitted by its readers are published.Ellen Cabajar Kho is the editor who if I remember it right was also part of the FK team before.
I'm wishing that the return of FK will be successful, I learned a lot from FK when I was young and I know how "advanced" the world has become but we have to remember what used to be good which you might be surprised could still be essential in these times. 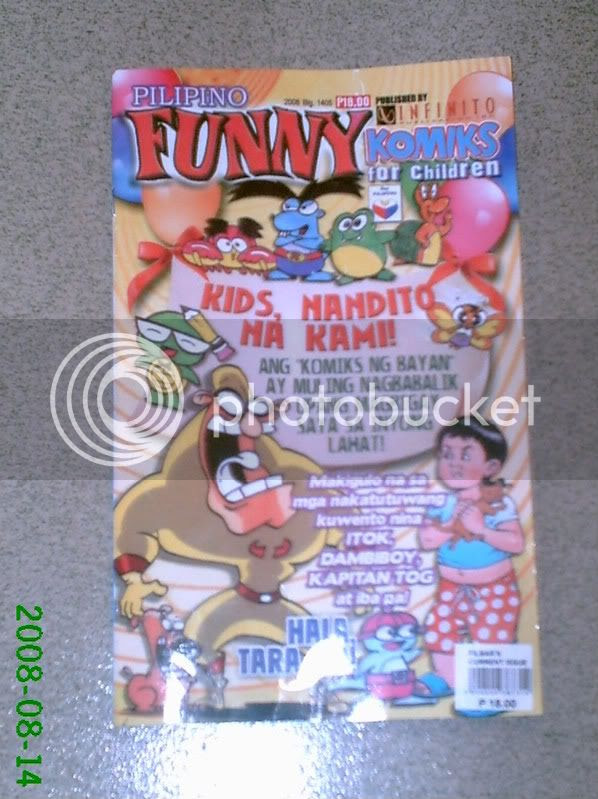 pre is this the 1st issue of the new funny komiks since the end of the filipino funny komiks where combatron is poublished?

this great news! I once drew 3 pagers for Funny.... man I still wanna draw for it kahit magkano bayad ^_^ miss ko narin si Ate Ellen is she still the editor?

Although after the first four comeback issues it has been months na na wala pang new issue. I'm worried na it folded up again