So why just comedies? Well, I haven't followed dramas/hourlong shows this year that much while I watched a LOT of sitcoms this year. I just love to laugh or at least smile especially how rough my personal life has been this year. I was just not in the mood to watching anything dramatic o stressful this year. But maybe next year I will begin catching up? Let's see ;)

Anyway, I basically sampled every half-hour sitcom on all 4 US networks (ABC, CBS,FOX and NBC) and few comedies on US cable but all the episodes in my list are all from broadcast TV sitcoms. I limited my list to one episode per show only to have variety and boy it was hard to pick just one. Here's my Top 10 Sitcom Episodes of 2012

I'm not the biggest fan of this show because I found most of the characters too unlikable (and the former showrunner Dan Harmon as well) but I won't deny that most of the time their high concept episodes deliver. In this episode in which the gang played a video game to get Pierce's inheritance we see the characters immerse in the actual video game itself with lots of hilarious references to 8-bit video games that even non-gamers can appreciate. It's a creative episode that is surprisingly moving as well with Pierce's half brother's story.

New Girl started as simply a star vehicle of the adorkable Zooey Deschanel but over the latter half of its maiden season, the supporting cast stepped it up and became one of the strongest ensemble of any sitcom today. In this episode, Nick is worried that he could possibly have a cancer and while I didn't find this episode the funniest of the series, this is the strongest work of the ensemble as they managed to blend in the dramatic and comedic moments seamlessly. The scene in where they just sit in the beach is quite poignant and that episode showed how the actors are committed to flesh out their characters.

With a plethora of awards Modern Family has on their belt, it's not surprising that a backlash will follow soon. Admittedly, the third season is weaker compared to the first two but the talent of the cast is enough to make this one of the most consistent funny sitcoms today. This is my favorite episode this year because it showcased how talented the cast is in the scene where everyone participated in a "living painting" wherein the smooth but rapid-fire exchange of banters and dialogues of the cast was pitch perfect. This show remains the Jim Parsons show but I believe that the addition of Mayim Bialik and Melissa Rauch helped the show expand their storylines. The humor may be broad and sometimes outright silly but they work out most of the time. This is my favorite episode of the season mainly because of the very funny competition between Sheldon-Leonard and Penny-Amy in a battle of games. The best one is the pictionary and Sheldon's interpretation  of  "present" is so hilarious. The other games that include Amy and Leonard doing Where's Waldo with no glasses,dizzy long division and competitive pie eating made up for one of  its strongest episodes to date.

This show is so joke-heavy but what's great about this though that even if sometimes you will not get the references they spew out, the energy of the cast is just enough to make you laugh or at least smile. The chemistry of the cast is impeccable and this episode just proves it where the gang tries to defy Penny's birthday curse. What makes this episode so strong is that all of the characters were involved in just a single plot as oppose to splitting the group in 2 or 3 subplots. With just a single story, we were able to see how good they play off each other from their slo-mo walk on their way to a bar to the last part when they were "cursed" to "swap bodies". And lastly, I never really thought Elisha Cuthbert has the comedic chops but she's really funny here and my favorite of this very likable and talented ensemble.

Truth be told, I was thisclose to finally dropping this show this year as I was beginning to get tired of the character shticks and the back-and-forth stories (Ted is over Robin, no he still has feelings for her, he's with Victoria, Victoria tells he still loves Robin blah blah) but the second part of their hourlong fall finale won my heart and made me forget how I haven't enjoyed the current season. Yes, I found Barney's The Robin plan too contrived and outrageous but you know what it doesn't matter anymore because of the very sweet and heartfelt proposal. Neil Patrick Harris and Colbie Smulders were great in that scene and they made me care about Robin-Barney again. Moreover, it also brought back the selfless and caring Ted that I liked and not that whiny pretentious dude the character has been lately. I hope this the beginning of good things for HIMYM.

Don't Trust the B--- is such a crazy show and this episode is my favorite of the series to date because of  how it played with the romantic comedy tropes without being so self-righteous. It's just amazing how this episode can pack in so many twists and make it work in just 22 minutes. Too bad the ratings for this show is disastrous and a third season is unlikely at this point. 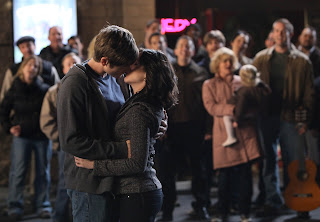 Raising Hope successfully resolved the "will-they-wont-they" tension between Jimmy and Sabrina in this very funny and romantic Valentine's episode. In this episode, Jimmy attempts to find out if Sabrina has feelings for him by making up that he has a girlfriend. It actually worked because Sabrina got jealous and broke up with his boyfriend. The plot is predictable but the way Jimmy finally confessed his feelings to Sabrina through a play he wrote and performed by his friends and family is such a silly but heartwarming grand gesture of love. It's hopelessly romantic but not too mushy. It also featured Martha Plimpton's terrific rendition of You Light up My Life. Raising Hope is filled with characters that are well, dumb, but they all have a big heart so that's why they could pull off an episode as warm and fuzzy as this. 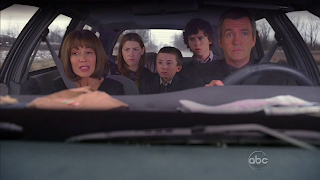 Of all the sitcoms I watch, this show is the one I had a hard time choosing what episode to place in this list. It's not because of lack of choices but the opposite! There are too many episodes that  I really loved this year so it was a difficult task to just pick one! But in the end, I chose this episode because of its brilliant opening scene where the Hecks were inside their car after attending the funeral service of their Aunt Ginny (Frances Bay who plays the character passed away) and they began talking about Aunt Ginny's life which led to them pondering about death in such a funny but realistic way. That scene actually gave me goosebumps because you can feel the tinge of genuine sadness despite the comedy surrounding the conversation. The rest of the episode is pretty great as well with Frankie thinking of ways how to take care of her surviving senile aunt Edie now that Aunt Ginny is gone and Sue's first real brush with love (which features a very romantic grand gesture featuring wrestlers). Strong ensemble acting coupled with impressive writing that hit the pathos straight on is what made this episode the best representation of why The Middle is one the best sitcoms today.

Hands down the best episode of any sitcom that I watched this year is Parks and Recreation's The Debate. This episode, written and directed by Amy Poehler herself, is a showcase of excellent writing and acting finding laughs even in the most tense situations. In this episode, Leslie Knope faces off with her opponent Bobby Newport as the election race heats up. Lots of funny moments here because aside from the two, there are three nuisance candidates also present and the one that I found the most hilarious was the porn star who has a thing for Leslie. What's great in this episode is that even if Leslie could easily ace the debate, Bobby actually came off well while still in character. There was actually a real threat to Leslie's position so when she finally said her final piece it was so riveting and you will find yourself rooting for her. It was such a compelling scene and every word she uttered was just perfect. Amy Poehler did a fantastic job in that scene, she made me understand why Leslie deserves to win and why she really cares so much for public service.   It made me wish that there are actual politicians in real life that is as sincere as her.

Labels: community, don't trust the b in apartment 23, happy endings, how i met your mother, modern family, parks and recreation, raising hope, the big bang theory, the middle, tv shows 2012