Last night was the Gala Night of "Sigwa" by Joel Lamangan. This is film is an entry for the Directors' Showcase of this year's Cinemalaya Philippine Independent Film Festival held at the CCP. The company I worked for, Beginnings at Twenty Plus, co-produced this film and actually the first venture of the company on producing films. I was asked to help out on the Gala Night and well I agreed because I want to experience it since this is something new for me. Well, I was a production assistant which basically all around, helping set up the registration booth, follow orders from bosses and stuff like that. It was tiring as expected but I really enjoyed it. Of course seeing celebrities was a delight. Oh how I love Megan Young (one of the stars of the film) she's so nice and lovely I also saw Carla Abellana which honestly I only found OK on TV but on person, wow, she's really gorgeous! She's not part of the film but she watched it with Geoff Eigenmann whose mother Gina Alajar is part of the cast. The Gala Night in general was good, there were so many people who watched! Although, we experienced some problems like the seating arrangement on the theater for example. So far the feedback I've been getting for the film is good. For example this one from TV reporter Atom Araullo (who watched the film with her girlfriend Patty Laurel). 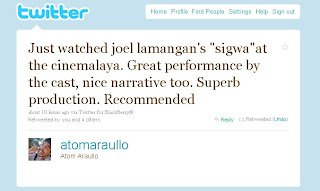 Hopefully more good reviews will come in. Anyway, if you want to watch Sigwa here are the screening schedules: