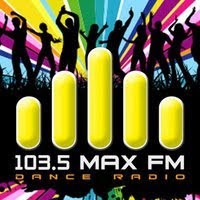 Today is the last day of 103.5 Max FM it will be reformatted to be a "masa" station mid-August. 103.5 Max FM lasted for three years. The first format of the station was pop/CHR then late last year it reformatted to dance format. Admittedly, I was not a fan of the latter format since I like the old format better but I still stuck with the station because of the DJs I like to listen to which were DJ Rain/Quich Lorraine, Bryan Scott and Scarlet.

I'm gonna miss the radio station, in 2008 it became my favorite station actually when DJ Kelly joined their station. I blogged before how I was addicted to her show before Kellybites Nights and met a lot of radio addict friends online. I love the Early Returns and Final Countdown because DJ Rain adn and Bryan Scott (later on Johnny Chase) were so interactive to listeners like me. I think 2008 was their best year, they had a great line up of DJs with King DJ Logan, Tetta News, The Sarge, Drei Ball, Carl McFly, Boo Kyler, HTown, Bryan Scott, Quich Lorraine and Kelly however by early 2009 a lot of the DJs left and later that year they reformatted to the current format of dance/house. As I've mentioned above I was not a fan of the said format but I appreciated how different they were from the rest of the mega manila FM radio stations. But well I guess it was really a tough sell as the station's management decided to shift to the masa format this month (as discussed on 103.5 Max FM thread in Pinoyexchange.com). Personally, I don't see the need to add another masa radio station in the already crowded scene in Mega Manila. And I'm no elitist, I appreciate the (current) masa radio format if the DJs are naturally funny. The thing is Mega Manila radio already has seven of them:

I'll give the up-and-coming 103.5 the benefit of the doubt. I hope they inject something fresh to the format. Although with Mr. Fu of Energy FM reportedly joining the new 103.5, I'm afraid it will be just the same of the 7 other masa stations. But let's see.

As for 103.5 Max FM, I will really miss the station and the very nice DJs they had. I wish to hear them again on radio soon. As I type this, DJ Scarlet is having a retrospective right now of the past Max FM shows and DJs. I'm glad they were able to say goodbye properly (unlike 97.1 Campus Radio and their short-lived revival Campus 99.5 that just disappeared.)