Review: A Moment in Time 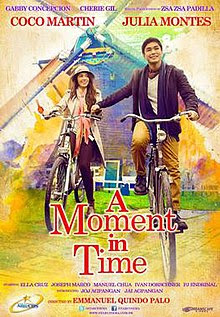 The unlikely love team of Coco Martin and Julia Montes was successful in the soap opera Walang Hanggan last year so it’s no surprise that a movie came soon after. A Moment in Time starts off with sweet tone (albeit a little creepy) but unfortunately it only lasted for about 15 minutes as a shift in the story backfired.

During a public transport ride, Patrick (Coco Martin) sees Jillian (Julian Montes) and was easily smitten. Patrick pursues Jillian and soon won her heart over but an incident in Jillian’s past threatens their relationship.

Let’s be honest, the initial premise of the story is a stalker’s dream and you would really have to stretch your suspension of disbelief so as not to get bothered on how Patrick chases Jillian. But Coco Martin is just a charming man so he makes this character lovable despite the creepy nature. And for a moment it actually worked because you would actually root for this couple but then the story shifts to a tragic twist and then the story crumbles.

The twist is such a contrived attempt to add drama to the story but instead of moving the story forward it just made the story stagnant and it struggled to get one point to another. Patrick who started lovable then became a confused mess. You just don’t understand what his intentions are anymore. After finding out Jillian’s past which affected his personal life he still pursued her and when they became a couple he breaks up with her for a reason that is not actually connected with Jillian’s past. I feel like that there’s a missing scene or two to drive that conflict. So when Patrick reveals to Jillian the secret it didn’t have the emotional impact that they were attempting to have. The story then shifts to have several chases, literally speaking, from the Philippines to Amsterdam. And there’s one last attempt to create conflict with a third party that came out of nowhere who then gives out a dramatic speech of letting go as if we knew the character all along.

A Moment of Time just didn’t work. Yes, it had a few moments of kilig but it was not enough to sustain interest as the decision to go to a melodramatic route barely held the story together. 4 / 10
Posted by forg/jecoup at 12:12 PM