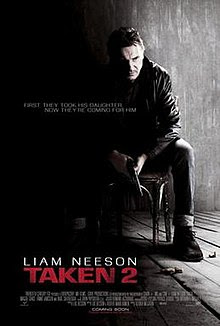 Taken was a surprise hit in 2009 and made Liam Neeson a bonafide action star so it's no surprise that a sequel was made. Taken 2 tries to take the formula of the first movie to a whole new level with uneven results.

Retired CIA agent Bryan Millis (Liam Neeson) takes his ex-wife Leonore (Famken Janssen) and daughter Kim (Maggie Grace) to Istanbul for a vacation but things got sour when the father of one Kim's kidnappers took them hostage to avenge his son. Bryan must once again use his advanced level of special forces tactics to get his family to safety.


Taken was remarkable because the action beats were so exciting to watch as it managed to class up a B-action movie and make implausible scenes oddly compelling. In Taken 2, there are more elaborate action sequences and chase scenes but while they are technically good they came off as rather generic and not as thrilling as the first one. There are still good moments in the movie though as they used Bryan's extensive survival & analytical skills very well. One particular set piece involves the use of a map, a shoelace and grenades to rescue someone which was so intrepid yet very enjoyable.


Despite the movie's flaws Liam Neeson is still so compelling to watch as Bryan. He says every line with so much intensity and power that is just incredible to watch. There's no standout line though like in the first movie when he warned the kidnappers that he will hunt them down and kill them all but nevertheless he carries the movie well and it's still worth the watch just to see him knock down his opponents. Grace has a larger role in this one and she did fine.

While not as remarkable as the first one, Taken 2 still has enough thrills to make for a satisfying action movie.

This is a pretty obvious example of a sequel that’s only going for the pockets of the audience, but at least there’s still some dumb, idiotic fun to it for the time it’s on-screen. However, I do think that Neeson is getting a bit too old for these roles even though he just started it all up. Nice review Forg.