I've seen a couple of new movies the last few weeks that I've been wishing to write a full length review here on my blog, unfortunately I didn't have the time to do so but anyway here are a few thoughts on the last movies I've recently watched in the theaters:
The Adventures of TinTin 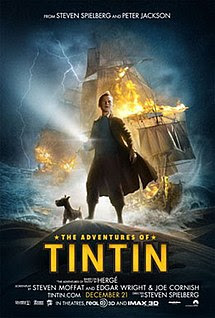 I'm not really familiar with the Tin Tin comic book series but since I've read good reviews about it and it is a collaboration between film titans Steven Spielberg and Peter Jackson so that was good enough for me to check this one out. It started a little slow and admittedly quite bored me but when they started the action sequences things started to pick up. The chase scene in Morocco was so imaginative and it was just done in one long single shot which is very amazing to watch. For that alone the movie is worth watching. The story itself is basic adventure movie stuff but it's a fun and I hope this makes enough in the box office to warrant a sequel because I want to see more of what Spielberg can do with animation. 8 / 10

Won't Last a Day Without You 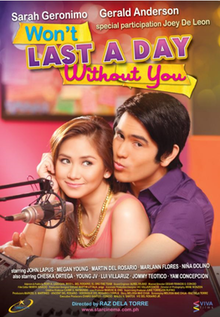 One of the better mainstream local flicks I've seen this year. Yes this is a your typical romcom where the leads end up together in the end but at least the journey to the resolution was an enjoyable ride and they had actually dimensions in the story. For one, it touched the complications of relationships although the approach used was light weight. Sarah Geronimo continues to exhibit that undeniable charisma and coupled with wide acting range, she's bound to do great things when the time comes she will do serious movies. She has it already so I hope she can have a material soon that will showcase what she is capable of as an actress. Gerald Anderson did fine as well and I think in this movie he finally graduated from the teenybopper stigma to a bonafide leading man. 8 / 10

The technical side of this horror movie is very polished, it was great to look at and captured the creepy mood very well. I like the fact that this movie didn't resort to cheap scare tactics as it chooses to use the atmosphere to bring out the creeps. The story is OK since it's divided into three timelines with something that connects in the end. I didn't quite like how they tied up storylines though as it felt a little contrived. The acting is pretty solid even for the newcomers who usually annoys me whenever I see their TV projects but they were handled well here. Best in show is Carmina Villaroel, she was just effing scary as the ruthless mother. 8 / 10 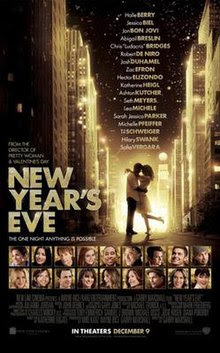 The movie is OK but forgettable. With too many stars in the ensemble that each needs to have substantial screen time, it's hard to make a cohesive story but it definitely sets you in the holiday mood. The audience in the theatre I've seen it responded well on Sofia Vergara's scenes. And the thing is, Sofia's character is such a cliche uttering predictable jokes but yet she sells every joke so well. The other vignette that worked out well and that was quite enjoyable was the pregnancy race with Jessica Biel and Seth Meyer. Michelle Pfeifer is aging gracefully but she was teamed up with Zac Efron who overacts but in fairness they have chemistry. Hilary Swank's & Robert De Niro's story felt a little emotionally manipulative but they pulled off the heart-tugging scene and I was moved. Josh Duhamel's story had a good "mystery" buildup but the resolution was blah. Sarah Jessica Parker just played a slightly tweaked version of Carrie and Abigail Breslin, whom I loved in Little Miss Sunshine, was annoying here. Halle Berry's story felt like an afterthought. The stories of Lea Michelle-Ashton Kutcher and Katherine Heigl-Bon Jovi suffered due to lack of chemistry. And worst of all Ryan Seacrest's "acting" is so awful! With that said I find the Rotten Tomatoes score of "7%" for New Year's Eve extremely low. It's not great by any means but it's more enjoyable than movies that had higher RT scores like The Change-Up and Bad Teacher. 5.5 / 10

The movie lacks a compelling narrative to keep you interested especially on the first part when things are just too slow but the great visuals will distract you anyway from noticing the flaws. This film is indeed lovely to look at but it's not enough to be fully satisfied with this flick. Truth be told, I'm not knowledgeable with Greek mythology but still I can notice that the story is not fully realized and just used bits and parts of the rich mythology to form a story. The climax features amazing action sequences which is worth watching but there was no momentum before it and you can't even root for the protagonist because by the time we get to the climax you would likely forget why is he fighting this battle or why was he chosen in the first place. There's a good reason behind it but it lacks the foundation because it was not developed properly as the story is all over the place telling too many stories at once without developing a solid core. The main cast is great though especially Mickey Rourke who exudes menace effortlessly. Immortals' production values is polished and the battles scenes were executed well, it's just frustrating that the viewers will to have to endure a messy narrative first to get there. 6 / 10

I never saw this movie in the theaters when it was first shown almost two decades ago so I was excited when I found out that the 3D re-release will be released here as well. What can I say, this is definitely one of Disney's best and watching it made me miss of the Disney magic in the 90s. I've said this before in my Winnie the Pooh review that despite my adoration for CGI animated movies (most especially Pixar) traditional animation will always have that certain charm and intimacy that CGI can't provide. The movie was converted well in 3D as it still looks crisp and great on the big screen but ultimately the 3D effect didn't add anything to my viewing experience. But still the opportunity to see this masterpiece on the big screen is enough for me. It's just way too different when you watched it at home. When I watched this in the theater there were only like 20 people which is understandable because it's a movie that is available on home video for several years already so it might not be worth it for some. Interestingly, the crowd I watched this movie was mostly adults around my age! I guess we just want to relieve our childhood once again. 9.5 / 10 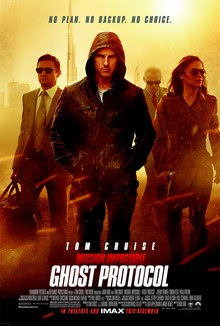 I saw this movie twice. First was on a regular cinema in Glorietta and the second was via IMAX at SM Mall of Asia (I got SM Gift Certificates from an officemate and I used it purchase an IMAX ticket) and well this one of the best action movies I've seen in recent years and definitely used the large screen format quite well. First of all, the mission - the story - is nothing complicated or new for that matter, it's basically stopping a nuclear threat. It's a simple premise but it's OK because its serviceable and competently constructed. The action sequences were just good, the much advertised Burj Khalifa scene delivered. It was so exciting to watch and was expertly executed! Another great action set piece was towards the end that used a parking area amazingly. It was so imaginative! Major kudos to director Brad Bird for the flawless execution. Tom Cruise's age is already showing here but he's still a solid leading man and the rest of the team: Paula Patton, Simon Pegg and Jeremy Renner were good as well. Renner in particular exudes great charm here and it bodes well for him because he'll be the star of the next Bourne movie. All in all, this is what blockbuster action movies should be. The movie will still be playing in IMAX screens during the MMFF festival so you could still check it out. 9 / 10

***
I wanted to check out Arthur Christmas but it only lasted a week in the cinemas and all the releases were in 3D! I think aside that it is an unknown material, the fact that you could only see it in costly 3D hurt it! The distributor should have release it in 2D and it could have stayed on the theaters longer. Oh well, such a shame I wasn't able to catch this in the big screen.
Posted by forg/jecoup at 10:23 AM