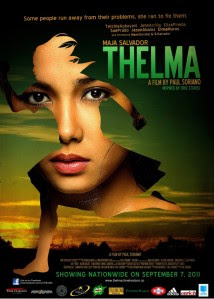 When I first saw the trailer of Thelma I liked it immediately. There was a sense of authenticity and depth that the trailer was able to express. After watching it I had mixed feelings, the acting and technical aspects are great but I felt there’s something lacking in the narrative for it to hit the homerun.

Thelma (Maja Salvador) is stubborn but cheerful young woman from Ilocos with great but undeveloped talent for running. Tragedy struck when her sister Hannah (Eliza Pineda) got into accident and she may never be able to walk again. Thelma uses her running skills to win a local race to buy her sister a wheelchair but it was just the start of what could be a burgeoning running career.

Thelma boasts of amazing technical achievement. It has the most beautiful cinematography of any local movie that I’ve watched this year. The seas, the farm, the windmills, the sabong, the racetracks, practically every shot was breathtaking. Ilocos’ natural beauty was perfectly displayed here. I wouldn’t be surprised that after watching this movie you would immediately book a flight to Ilocos.

However, the screenplay is a little confused as it attempted to touch a lot of stories but without developing it properly. Hannah’s accident was the driving force for Thelma to pursue running but it didn’t get the resolution it deserves. I’m not expecting a happy ending of some sort but the movie left the arc hanging. There are also subplots about her mother’s sickness; her auntie’s love life and Thelma’s own love life, which I felt were unnecessary to the story.

What the story got right is the plight of an impoverished but talented athlete like Thelma. I met athletes like her before when I was with the student publication back in college and I can say that Thelma truly symbolizes them. I saw in Thelma an athlete’s struggle to balance school while doing their best to shine on their sport because they really need it. While their future rests on how they perform, you can truly see that they are passionate with their sport. The homesickness an athlete could feel was perfectly touched here. When Thelma’s family called her and Thelma choked up, it felt so raw and affecting.

The acting is pretty great in this movie led by the terrific Maja Salvador. Salvador commanded the screen like no other. You can see the dedication she poured in this role. Her Ilocano didn’t feel forced and she gave justice to the physical demands of playing the character. Her dramatic moments never went melodramatic or too sappy. I particularly like the scene when she and Hannah were eating empanada as they silently weep their misfortunes. It was a moving scene that never went over the top.

While Thelma never fully reached its potential storywise, I still consider this one of the better local movies released in mainstream cinemas this year. 8 / 10