HF released its third issue today. For the first time, we were able to release on time. It would have been a mess it we were late since our front page has a Christmas theme and we release it next year. However, partial copies were only delivered to us today but the remaining order will be out tomorrow. Next year will be tougher. We have two broadsheets, two magazine, 1 art/photo folio,1 literary folio, and a students' election newsletter to release in a span of three months. Good luck. I hope we will not be late.

Here is the cover for the third issue of HERALDO FILIPINO: 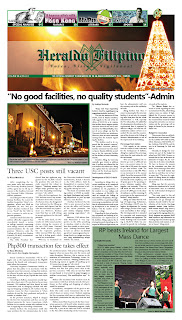 nothing major error at least unlike JUNE-JULY 2006 fiasco hehe