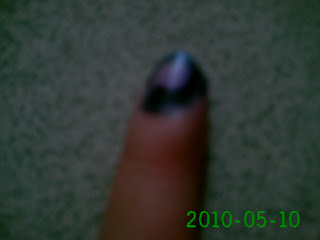 For nostalgia's sake here was My Dirty Finger 2007 post

The first time I voted it was a walk in the park but this year it was a bit hard. Like the last time we arrived in the precincts at 7:30 am but because of the clustering of precincts this year there was chaos! And with the intense heat making things even hard we decided to go home and vote later. Back at home while watching the news I was worried that we might not be able to vote. We came back around 2pm and thank God every thing is smooth sailing already and voting took about 20 minutes. It's kinda funny but I was bit while shading the ballot, I was afraid that I might do a mistake that could result to the ballot being rejected by the PCOS machine and thankfully my ballot was accepted, reading the "Congratulations, your votes have been registered" on the PCOS machine was such a great feeling.

Now that I voted and I await for the results, while I won't deny that I'm hoping for surprising results but whether or not my chosen ones will win, I'm still proud with my choices and that I let my choice be heard. Let me quote what I wrote on my blog entry 3 years ago when I voted for the first time:

"The political situation may seem hopeless but if we the citizens give up, the more the country will suffer. Yes, our votes could be cheated, but you could not complain to something you were not a part of (especially that even if you have the opportunity to vote, you decided not to exercise it). Your choices may not win but because you voted you have the right to demand to the winners to prove you wrong and show you they are deserving of the position.Yes, it is just one vote, but it makes a difference."